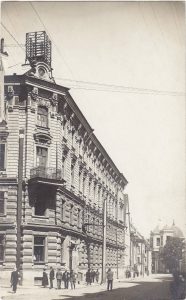 The magnificent building Hotel Telegraaf, as we know it today, was built in the Old Town of Tallinn at VeneStreet 9 in 1878. Designed by the architect Peter Schreiberg from St. Petersburg, it was originally a four-storey house, the two topmost floors added later.

The enormous wealth of the citizens of Tallinn demanded appropriate banking, and the famous Handelsbank with branches throughout Germany and Russia, occupied the ground floor, whilst the upper floors contained elegant apartments.
At the beginning of World War I the bank closed and, resisting the Bolshevik Revolution, Estonia became independent. At this time Handelsbank ceased operations, and in 1918 the Telegraaf House came into its own! It became the main centre of communications – a great post office with full telephone services offered to public.

After a period of tranquillity, World War II began, and in 1944 Tallinn suffered severe air attacks. Much of Vene Street was badly damaged including the Telegraaf House. However, the telegraphic and postal services continued to be based there until 1991. Parts of the building became offices, and the rest remained cluttered with the remnants of telecommunications – endless wiring!
The story of the Hotel Telegraaf is the story of Tallinn. It is fitting that the ancient cultural centre of Estonia should now boast an elegant five star hotel at its very heart on its most ancient and distinguished Vene Street – the street of hospitality.
The telegraph exchange station, housed in the Central Post Office, played an important role in the December 1924 attempt to overthrow the Estonian government. Local Communist hit squads, pushed and aided by the Soviet Union, attacked strategic points in Tallinn in the early morning on December 1st. They planned to overtake the post office in order to send a telegram to Soviet troops, who were to come to their aid. The plan was foiled by one of the most popular Estonian soldiers, General Ernst Põdder, who happened to be passing by, saw what was happening, and took back the building with a handful of officers. On the staircase, he shot a rebel who had taken aim at him from above. His officers dispatched five rebels, two of whom were attempting to send the telegram. The coup failed and the Republic of Estonia survived.

The Revaler Handels Bank built our magnificent building in the old town of Tallinn at Vene Street 9 in 1878. Designed by the architect Peter Schreiberg from St. Petersburg, it was originally a four storey house, the two topmost floors added later. When the Republic of Estonia was established in 1918, the building was used as the post and telegraph center. The building retained this function during the Soviet period. In 2005, the wing of our building which had been destroyed in World War II was rebuilt.

Telegraphy, the long-distance transmission of written messages without the physical transport of letters, was invented in the 19th century. At first, signals were forwarded by sound (drums, bells, sirens) and light (fires, torches, semaphores). But in 1837, Samuel Morse and his telegraphic code of long and short signals,revolutionized the transmisson of electric impulses through wires.

The History of Tallinn

In 1154, Tallinn appeared on the Arab cartographer al-Idrisi’s world map. In 1285, the city became the northernmost member of the Hanseatic League, the mercantile and military alliance of German-dominated cities. Medieval Tallinn, with 8,000 residents and 66 towers of defense, sat at the trade-crossroads of Europe and Russia. Though it would be for hundreds of years, until February 24,1918, that Estonia would proclaim its independence.